Speciation in the common chaffinch

We are interested in understanding how island species adapt to local conditions upon colonization from the mainland (or from other islands) and the ecological and genomic mechanisms involved in the evolutionary divergence that takes place, ultimately resulting in a different species. That’s why, since 2016, we have been studying the chaffinch (Fringilla coelebs) population on the island of La Palma (subspecies palmae), in the Canary Island archiphelago, Spain. There, in the absence of the blue chaffinches, Fringilla teydea and Fringilla polatzeki, which occupy pine forests in Tenerife and Gran Canaria, respectively, the common chaffinch of La Palma has colonized the extensive pine forests on the island. We noticed early on that the birds on the chaffinch’s original habitat (humid cloud forest, or laurisilva) and those in the pine forest, looked different. Indeed, the latter are smaller, have less orange on face and breast, and have longer bills. 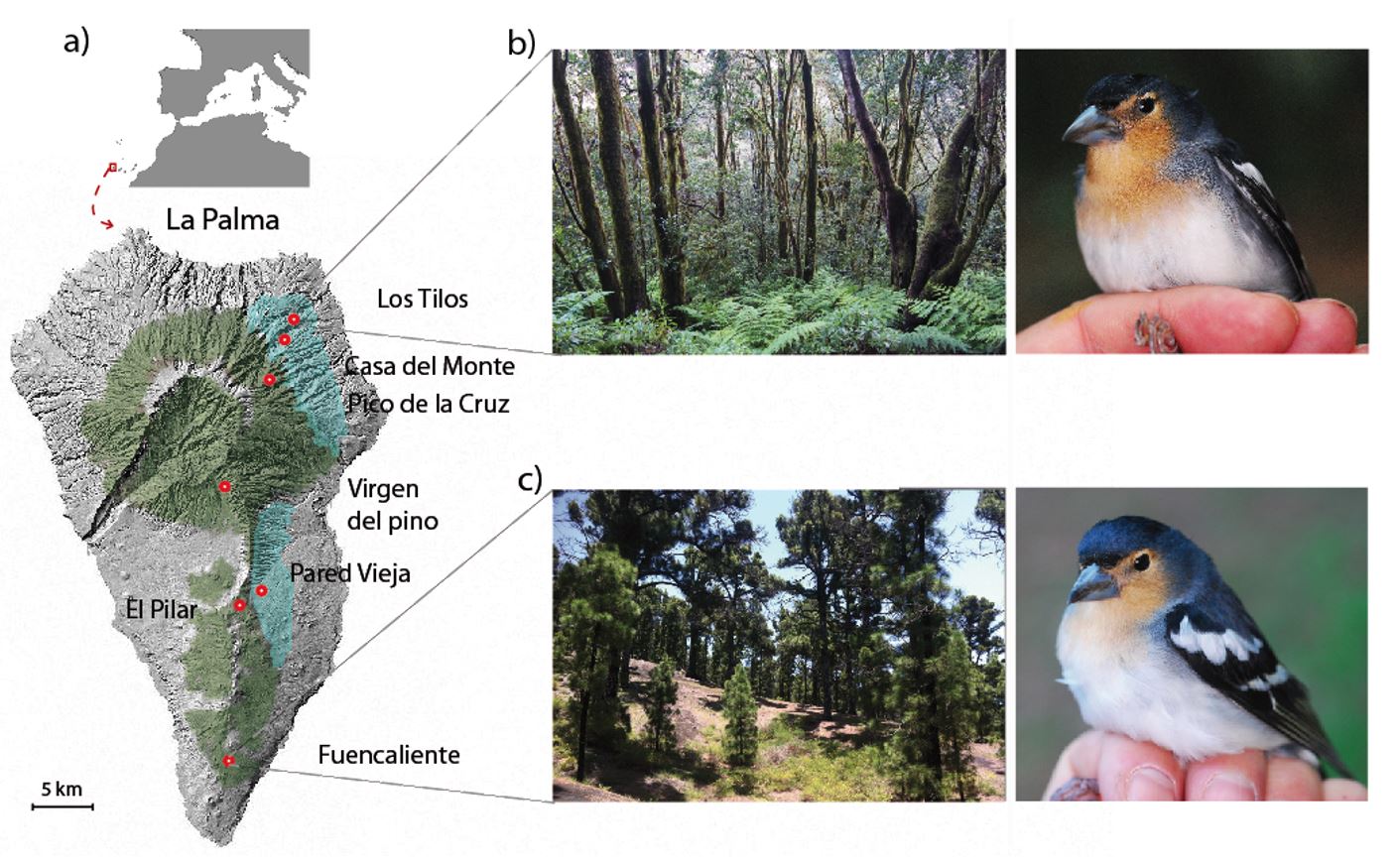 In the last several years we have been sampling all over La Palma to understand these differences and explore their genomic basis so we can shed light on the process of local adaptation. So far we have found striking genetic differentiation among localities that are just a few kilometers apart, suggesting that dispersal is very low and gene flow highly constrained. We have generated a high-quality reference genome for the species and have obtained genome-wide sequences for several individuals in the different habitats, so we can detect the regions of the genome responsible for the phenotypic traits we find to be important in local adaptation. We will post results soon!

We are also studying the diversification of all the different chaffinches out there, led by PhD student María Recuerda. In collaboration with Juan Carlos Illera (Oviedo University) and Guillermo Blanco (MNCN-CSIC) we have published a study on the radiation of chaffinch forms in Macaronesia (Azores, Madeira, Canaries) and Northern Africa. In addition to the common chaffinch (Fringilla coelebs coelebs) from Eurasia, there are other chaffinches currently considered subspecies of F. coelebs. These include the Magreb chaffinch in Northern Africa (subspecies F. c. africana, F. c. spodiogenys, and F. c. harterti), the Azores chaffinch (F. c. moreletti), the Madeira chaffinch (F. c. maderensis) and the Canarian chaffinch (subspecies F. c. canariensis, F. c. palmae, F. c. ombriosa and F. c. bakeri). This map shows the ones included in our study, and their distributions: 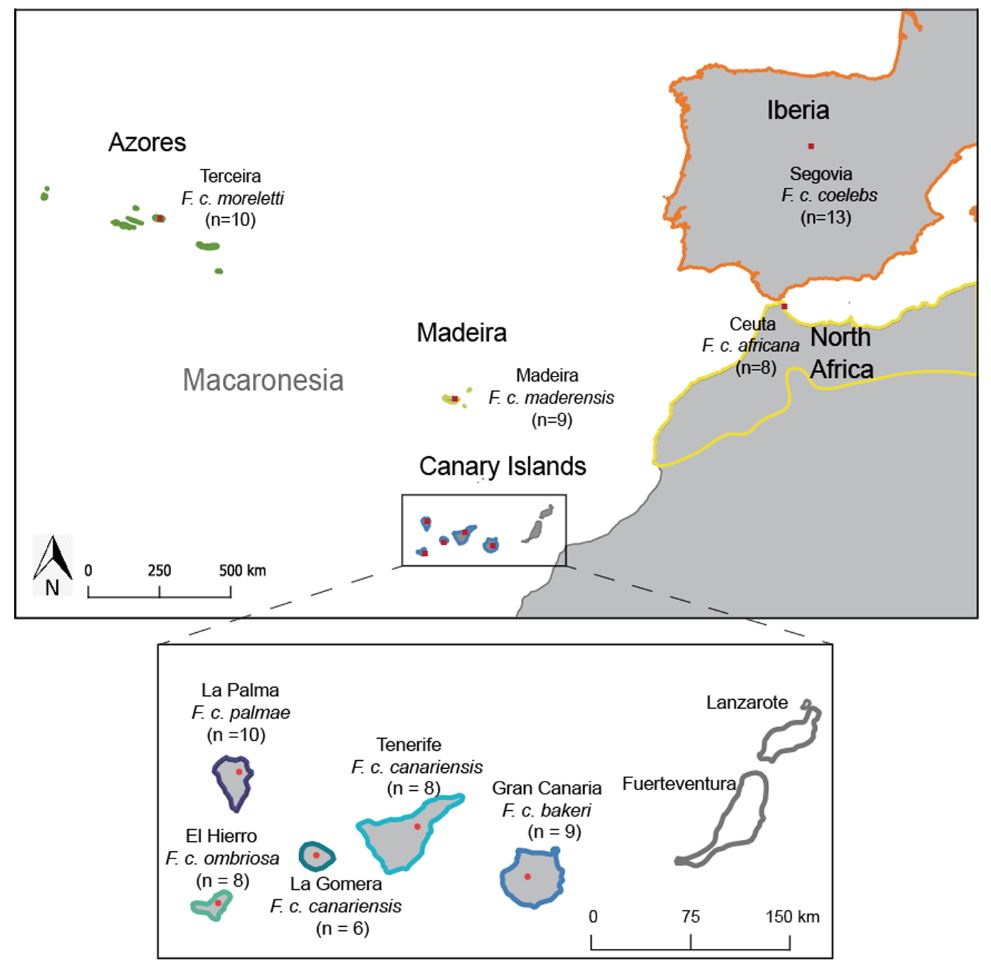 Using genomewide SNP markers obtained from genotyping-by-sequencing, we have been able to recover the relationships among different forms and the colonization history of the different islands. We found that all forms are differentiated in phenotype and genotype, and in the Canary islands each island has a genetically distinct population, suggesting that gene flow among islands is highly restricted. The following figure represents a Maximum-Likelihood phylogenetic tree based on 100,166 genome-wide neutral SNP loci. Figures in black are node support values. Sketches on the right depict the main phenotypic differences between forms, with chaffinches from the Canary Islands represented by subspecies palmae:

We have also used an ancestral-range biogeographic analysis to determine the colonization route, and found that it took place in a single wave and started from the mainland to Azores, then to Madeira, and finally to the Canary Islands. Subsequent colonizations led to a decrease in genetic diversity, so that populations in the Canary Islands have the lowest genetic diversity of all. In the following figure, pie diagrams at each node represent the inferred geographical ranges for each ancestral taxon, with the probability of each area indicated by its respective color. Branch color represents the most likely state for each branch, and dashed branches indicate that multiple states were tied. Numbers above pies represent posterior probabilities of node support, and figures to the right of each node correspond to age in million years, with confidence intervals (95% HPD) in brackets:

Here are photographs of three of them that we have sampled recently: coelebs from mainland Spain, palmae from La Palma Island (Canary Is.), and africana from Northern Africa: 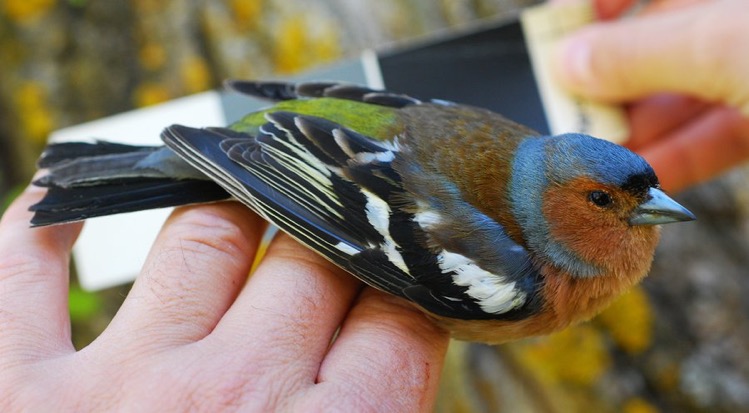 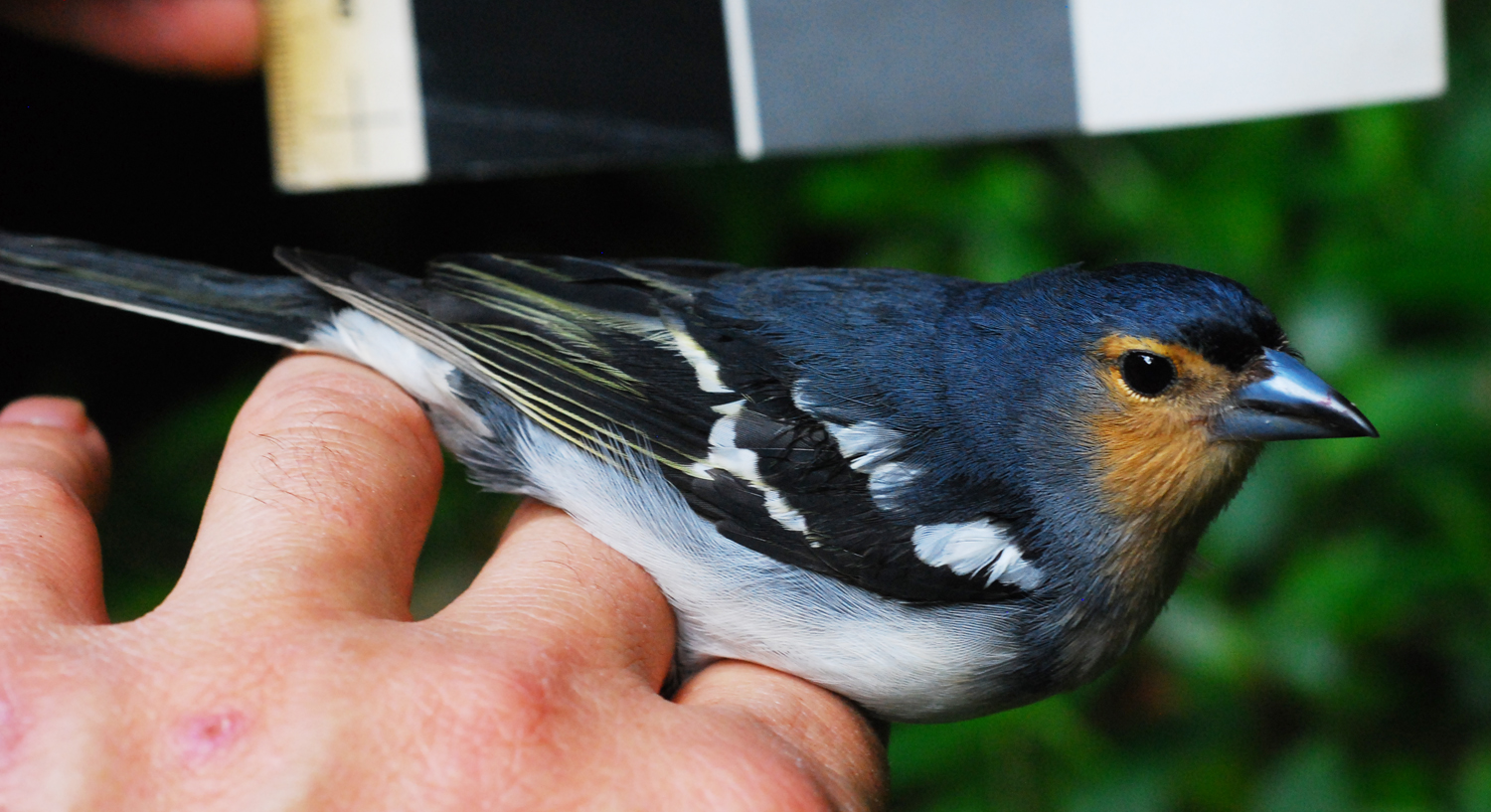 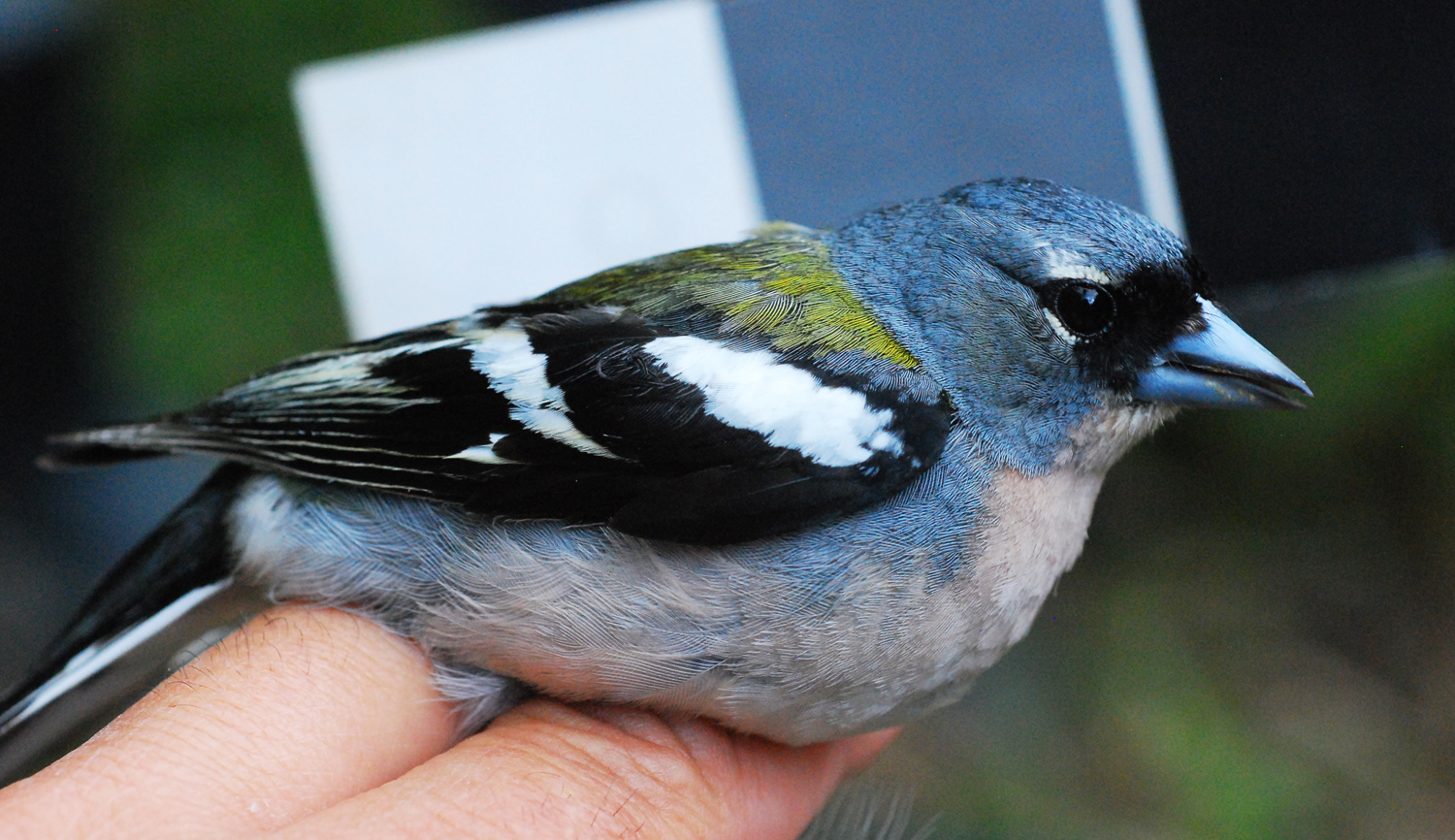 For further details on this study you can read the full article here.

Diversification of Amazonian birds (and their parasites!)

Conservation genetics of the Great Bustard

Speciation in the Yellow-rumped Warbler complex

Speciation mechanisms in the Junco radiation